The Gawler Region Community Forum Inc. provides a forum for community involvement in decisions about planning and development and the promotion of ecologically sustainable development and conservation in the Gawler region 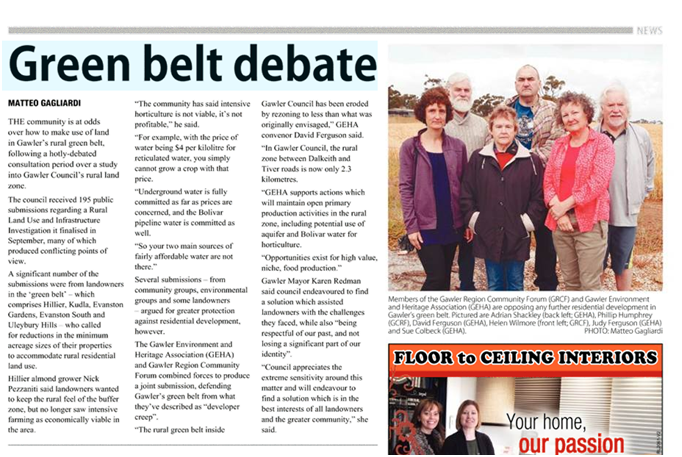 We are told that “The department is not fast tracking urban development at Concordia”.

The original question asked by Mark Parnell MLC in Parliament on 13th October.

NEWS Dec 2015 – Questions and answers: the Councils’ positions on what should or shouldn’t happen at Concordia

NEWS 1st July 2015 – A story on page 10 of Gawler’s Bunyip: more on what is or isn’t or may be happening in Concordia 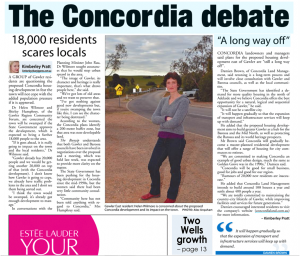 Penny Johnston and Tammy Jennings met with Gawler residents to discuss the results of freedom of information applications by Greens MP Mark Parnell’s office. Residents toook their concerns to the net and voiced them loud and clear:

Momentum is building behind calls for greater transparency and consultation that is truly in the public interest.

Gawler is a historical town 40km north of Adelaide, currently separated from the city suburbs by a green belt.  The town has approximately 20,000 residents, but is facing a massive and rapid increase in size. Formal plans for large scale growth for Gawler were made public in 2007, with a proposal to extend Adelaide’s urban growth boundary, and again in 2009 with the release of the 30 Year Plan. These proposals mean that Gawler is now facing an expansion over the next 10 years that will double the population of the town.  Over the next 20-30 years, the proposed development of Concordia, on Gawler’s north eastern boundary, will bring the town’s population to between 50 and 60,000. In addition, on Gawler’s northern boundary, Roseworthy is also earmarked for massive greenfield development, to accommodate 60,000 or more people. During the last 4 years, the community in the Gawler region has continually expressed many concerns with these proposals, relating to issues such as traffic, infrastructure, lifestyle, environment, and food and water security.

A public meeting was held in Gawler following the announcement in 2007 of the proposed changes to Adelaide’s urban growth boundary.  Towards the end of this meeting, 120 residents and other interested parties decided to form a group to represent the local community and express their concerns with the proposal.  This group was named the Gawler Urban Growth Boundary Forum Committee. The group organised and sent a petition to the Government asking for adequate information about the impacts on traffic, infrastructure, services etc.

In May 2009, the Gawler East DPA (Development Plan Amendment) was released for public consultation.  This described the rezoning of 320 hectares of grazing land and a former quarry to accommodate 10,000 new residents.  In response to the DPA, there were 350 written submissions from the public, which for the Gawler area is a remarkable result.  Apart from a handful of submissions from beneficiaries, these were overwhelmingly critical of the Gawler East DPA and raised numerous issues.

The public meeting for the Development Policy Advisory Committee was a marathon event, not finishing until 12.30am.  42 people gave oral submissions and 39 of these expressed concerns with various aspects of the DPA.  Many asked that the DPA be withdrawn.  The Gawler East DPA was approved by the Minister in August 2010.  The community was appalled to see very few changes made to address their concerns.  Although some members of our group asked to be heard at the Environment, Resource and Development Committee hearings relating to the DPA, the Committee decided not to hear any submissions from the public.

In October 2010, the group decided to become incorporated and to change its name to the Gawler Region Community Forum.  The group also decided to look at the possibility of a judicial review into the rezoning of the land at Gawler East.  The main reasons for this were:

After 6 months of court proceedings, the Forum ceased the legal action prior to the scheduled trial.  A range of principles had been agreed to by the developer of the majority of the land.  These principles should lead to better environmental outcomes in the development.  The first blocks of land at Gawler East are now on sale.  It is sad that the final option left to the community was legal action, which carries a financial risk and is a stressful and time-consuming process.  The group could not have done this without the efforts of its members and the work our solicitor, Kris Hanna, undertook on our behalf.

The Forum continues to be an active proponent of much better outcomes for planning in our area and the State.  From this whole process, we have learnt there is an urgent need for changes to be made to the way land is selected and approved for development.  This includes not merely “public consultation”, but the paramount requirement for the shaping of our State to be based on the wishes of existing communities.