Our President wrote to the Minister for Planning today clearly outlining how demolition controls may be weakened in the Planning and Design Code.

Click below to read the letter and get the facts – then write to your MP urging them to help fix it before Phase 2  is implemented on 31 July in rural areas.  Phase 3, for the urban areas, is due to be implemented in September so there is a little more time.

Let’s save our precious historic buildings before its too late!

Letter to Planning Minister with Attachments from CASA 7 July 2020

Letter from Caring for Joslin to Legislative Review Committee

Thanks to everyone who attended our first virtual general meeting via Zoom. Just over 50 people joined us from their lounge rooms, backyards, and laundries to hear some terrific speakers and have questions answered by Michale Lennon, Chair of the SA Planning Commission.
Below is the link to the recording from the meeting.
Hon Mark Parnell MLC starts at 5:30
Dr Iris Iwanicki at 15:52
Stephen Smith (Local Government Association) at 27:28
Planning Commissioner Michael Lennon, and Q&A, starts at 36:44
Mark gave an update on the heritage petition tabled in Parliament and how unusual emergency powers squeaked through Parliament which reduces community consultation and local government input on state developments.
Iris gave a strong critique of the “What We Have Heard” report, and Stephen provided an update on how Local Government is being involved in the development of the Code.
Great questions were posed by audience members, including querying what does “See and experience” means (1:30:00) & what is going on with Historic Area Statements (1:33)
At 1:40:55 there is an interesting quote from Lennon explaining that the Code is not really about policy, its about systems. So hopefully the final version of the code will get back to the “like for like” principles that were promised, instead of introducing new planning policy on the run without proper consultation.
There were many other great questions asked by the audience, including why negative feedback was not included in the report and how the implementation of the Code will work.
A big thanks to our speakers and to Mr Lennon for being so generous with their time.
To listen click here, although you may need a Zoom account (it’s free):
https://us02web.zoom.us/rec/share/1Mt0BJDx3F9IcrPS8kjDC4cFIqK8aaa8hiZP-fEMnUws8l11IImWWO3luDXs514Z?startTime=1589448576000
Audio Link: https://vimeo.com/user47185838/download/419828582/bf988a35f9

Thanks to all CASA group members who made written submissions on the draft Planning and Design Code.

Hopefully, they will be published on the DPTI website soon, but until then, here they are! 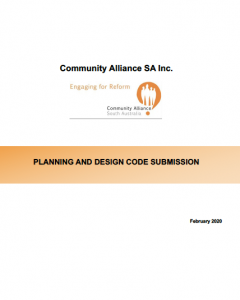 Thanks to all of you who contributed and provided feedback during the development of our submission on the draft Planning and Design Code.  Dr Iris Iwanicki did a great job on behalf of all of us, digging deep into the Code to analyse how it will affect our residents, natural resources and heritage if fully implemented.

A special thanks to those of you who completed the survey on their experience in accessing the Code and you can read their reports at the end of the submission.

Without the donations from many of you, we wouldn’t be able to provide the Planning Commission with such a professional and thorough submission, so thanks again to those of you who made those contributions.

Click on the link below to have a read of the final submission:

The 28 February submission deadline for the draft Planning and Design Code is fast approaching, and we are very pleased to attach the draft CASA submission that Dr Iris Iwanicki has drafted on behalf of members.

Thanks to those who attended our submission workshop at our last general meeting. This feedback was very helpful and most of it has been included in the submission. If you have any questions or further feedback, feel free to contact Dr Iris on 0438 535 058 by Tuesday 25 February.

Don’t forget to lodge your own submissions on the draft Code. You can provide submissions on behalf of your organisation as well as personal submissions. Marion has launched an excellent campaign “Not in Our Streets”, and Burnside provided examples of submissions on their website, as well as some useful information on how the Code will affect various residential zones. To view, open this link: https://www.burnside.sa.gov.au/Latest-News/Homepage-Latest-News/Planning-Reforms

By this time your local council has probably drafted a submission and if you go to their website you may find it. To find your council’s website go to  https://www.lga.sa.gov.au/councils. To learn more about how the Code may affect our suburbs, read Mayor Robert Bria’s deputation to Parliament’s Environment and Resources Committee which is also attached.

Email your submission to DPTI.PlanningReformSubmissions@sa.gov.au, or complete the online form or template by going to https://www.saplanningportal.sa.gov.au/have_your_say/Draft_Planning_and_Design_Code_for_South_Australia#feedback

And don’t forget to tell your MP your views. Contact details here: https://www.parliament.sa.gov.au/Members/Members-Home

THEY JUST DON’T GET IT…..or MAYBE THEY DON”T WANT TO KNOW ABOUT IT.
Allan Holmes, one of the State Planning Commissioners was interviewed by Peter Goers on ABC Radio last week. He was asked about negative community reactions to the proposed Planning and Design Code.

He said……..’There’s an active movement. Whether its huge, I’d dispute that. It’s perhaps a couple of hundred people, and it reflects a certain section of Australian society’

We remind Mr Holmes that:
The launch of the Protect our Heritage Alliance on 17th September attracted 500 people.
An electronic petition against the implementation of the Code has 9,000 signatures.
A more recent hard copy petition has 4,000 signatures.
The ‘certain section of society’ he refers to comprises voters.
It sounds as though Mr Holmes and his fellow Commissioners have their heads in the sand or are whistling in the dark. Or both…..no mean feat… but we are dealing with very accomplished people here.

Protect our Heritage petition to Parliament-2 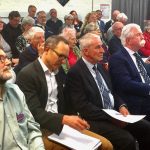 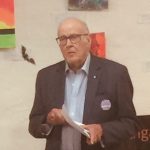